We wanted to share these interesting facts about the Greater Kudu.  The Greater Kudu is a magnificent, peaceful animal that can be found in Southern Africa at wildlife parks.

Whether you are visiting southern Africa or exploring your homeland, the Greater Kudu should most definitely be on your list of things to see. They are not only humbling to see, but they are also extremely important to our eco-system and the conservation thereof.

What is a kudu?

The Greater Kudu is a species of antelope that browses shrubs and trees. It can be identified by its tawny-brown to grey-brown coats 12 distinctive white stripes running down its flanks.

The males, also known as a kudu bull, grow long, spiral horns that can be as long as 1,8 m. The kudu bull is significantly larger and more vocal than the females. The Greater Kudu bull can weigh as much as 315kg and can be as tall as 160cm.

Where do they occur?

The Greater Kudu enjoys drier, warmer climates and can be found in Southern Africa game reserves, such as the Mpeti game reserve. When on one of the scenic game drives, you will be sure to spot a Greater Kudu in its natural habitat.

Usually, the male kudu bull can be found in bachelor groups. However, should you visit during the mating season, you may be able to catch a group of between 5-15 kudu including offspring. This provides a stunning setting for wildlife photography. 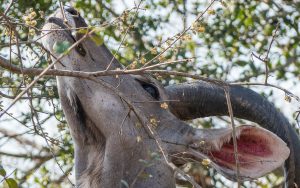 How do they contribute to the eco-system?

The kudu animal is extremely peaceful and will often run from a fight rather than face a confrontation. This does, however, make the kudu an easy target for predators such as the lion and leopards.

These animals survive off the meat of the kudu. The kudu finds its nutrition through shrubs and trees. While enjoying their meal the kudu will often knock off branches that then grow to be a new shrub/tree on its own. A great example of this is the spekboom.

The kudu is often poached for its horns and meat. Due to this, wildlife conservation is extremely important to ensure that this animal is not added to the endangered species list.

Wildlife parks offer a safer space and protection for the Kudu to continue living and thriving in wildlife Africa.

What are you waiting for? Book a game drive at Mpeti game reserve for the chance to experience the Greater Kudu for yourself!

1 thought on “Facts about the Greater Kudu”